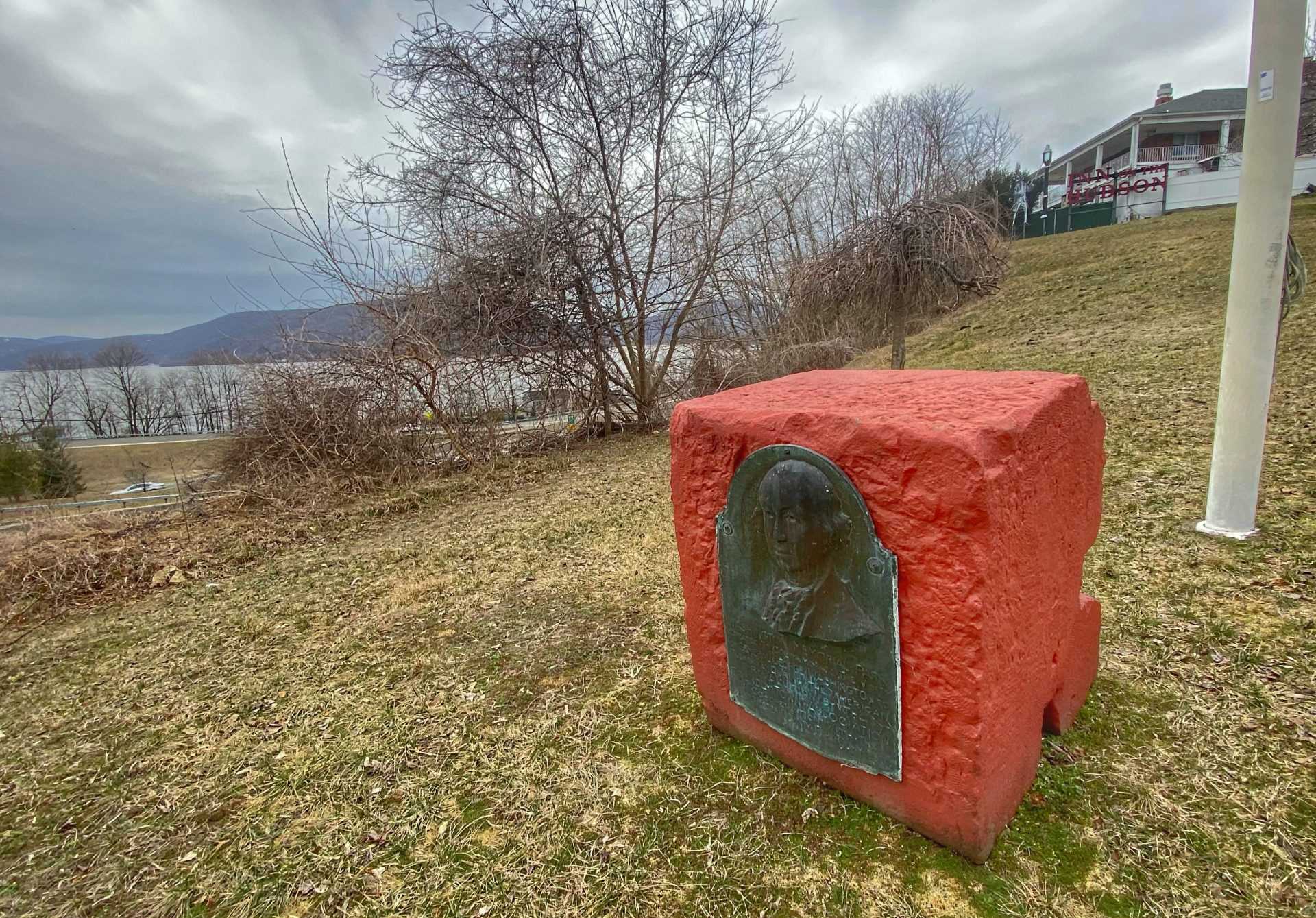 By Jim Striebich  “All the secrets of the world worth knowing are hiding in plain sight.” – American author Robin Sloan

If you asked most Peekskill residents to name the city’s smallest park, you’d probably get answers like “Monument Park”, “Esther Place”, or maybe even “Jan Peeck Square” (the little downtown plaza where the Harriet Tubman statue was installed). But the smallest park may be unknown to most; it’s likely just hiding in plain sight.

On a little knoll at the corner of Main Street and the Route 9 northbound on-ramp, at the end of the driveway for the Inn on the Hudson, behind an old wrought iron and stone fence, there are three white flagpoles, with a curved hedge at their base. If you use Main Street to get to and from Route 9, as I do – you’ve passed by it hundreds of times.

Behind that small hedgerow, there lives an irregular granite cube; roughly two feet on each side, painted a rusty red. As you approach it from the Inn’s driveway (the only real access to it), the cube – with it’s oddly-carved geometry – looks like a bit of modern sculpture. But on the side facing Main Street, protected by the old fence, and hidden from view by that hedge – is a patinated bronze plaque dominated by the sober-faced but unmistakable visage of George Washington.

WASHINGTON MEMORIAL PARK is the headline cast beneath the bust of our first President, answering our earlier question – this – is most likely Peekskill’s smallest, and least-known park.

Beneath the text, the plaque is worn smooth and the bottom edge a bit ragged. A single digit “9” is visible, but the rest of the commemoration date is no longer legible. No other explanation is provided here, no plaque explaining the plaque. Just George, gazing at the back of a hedge. Over his right shoulder (if he could turn his cast metal head), beyond the rushing traffic of Route 9, and the occasional roar of a passing commuter train, is the same commanding view of the Hudson River and mountains beyond that the real Colonel Washington looked out on from this very spot, nearly 250 years ago

Is this a real Peekskill park? The city’s website lists Charles Point, Depew, Franklin, Lepore, the dog park, the baseball stadium, Riverfront Green, and Tompkins as our parks. Far from exhaustive, the site forgets downtown classics Monument Park and Pugsley Park; it omits our second-largest park (Fort Hill); it excludes the exquisite vista of Fleischmann Pier Park – and doesn’t draw a distinction between Riverfront Green and its younger sister, Peekskill Landing Park. Unknown to many residents, Peekskill even encompasses the northern edge of Blue Mountain Reservation (also not listed). For a city of 25,000, Peekskill has a lot of parks!

Googling “Washington Memorial Park Peekskill” got us nowhere. For this writer, there’s nothing more exciting than finding a real-life thing that has zero documentation on the Internet (until now!).

So we rang up celebrated amateur Peekskill historian Frank Goderre. There’s a good chance you know Goderre: he’s the guy who recreated the Peekskill, A Friendly Town signs, and a dedicated volunteer who cleans and mows the green no-mans’-lands formed by the Route 9 exits at Hudson Avenue and Main Street. If Frank doesn’t know about Washington Memorial Park, then no one does.

“It’s in Chester Smith’s Book!” exclaims Goderre without hesitation. “In 1923, he formed the Friendly Town Association, and he incorporates in in 1928 – so if you look at the plaque, it actually says ‘The Friendly Town Association’”. (To be fair, the Herald’s Publisher Regina Clarkin also knows about Washington Memorial Park…she learned it the hard way at a recent Peekskill Museum trivia contest; it was one of the very few questions that stumped her).

An hour later I’m cradling a rare copy of the succinctly-named “Peekskill, A Friendly Town: Its Historic Sites and Shrines: A Pictorial History of the City from 1654-1952” by Chester A. Smith and Dr. Albert B. Corey. And there, starting on page 29 of the 454 page tome, is a three page history of the site – complete with photos.

The bronze tablet was originally installed in 1941 on a much larger, semicircular stone edifice called the Washington Exedra. Anyone who’s walked down the sloping hill of South Street near Grove likely knows of the Lincoln Exedra: a rounded belvedere that extends the sidewalk out onto the hillside like a stone balcony, with its own plaque commemorating Abraham Lincoln’s 1861 speech at the old train depot (and current Lincoln Museum) in the distance below.

The 1925 Lincoln Exedra was lovingly restored by Peekskill’s Lincoln Society and rededicated in 2017.

George Washington was a Revolutionary War hero, first US President, and “the father of our country”. According to Smith’s book, Washington spent 95 days in Peekskill and its vicinity between 1776 and 1782. “He often traveled down Main Street (then North Street) on his way to the river front and to West Point and viewed the Hudson looking south from here” [the location of the Washington Exedra].

But Washington – unlike Lincoln – was also a slave owner, and brutal extirpator of uncooperative Native Americans. Perhaps that’s at least part of the reason why his legacy in Peekskill is less celebrated? And why Peekskill’s smallest park is today largely neglected and forgotten…hidden in plain sight.