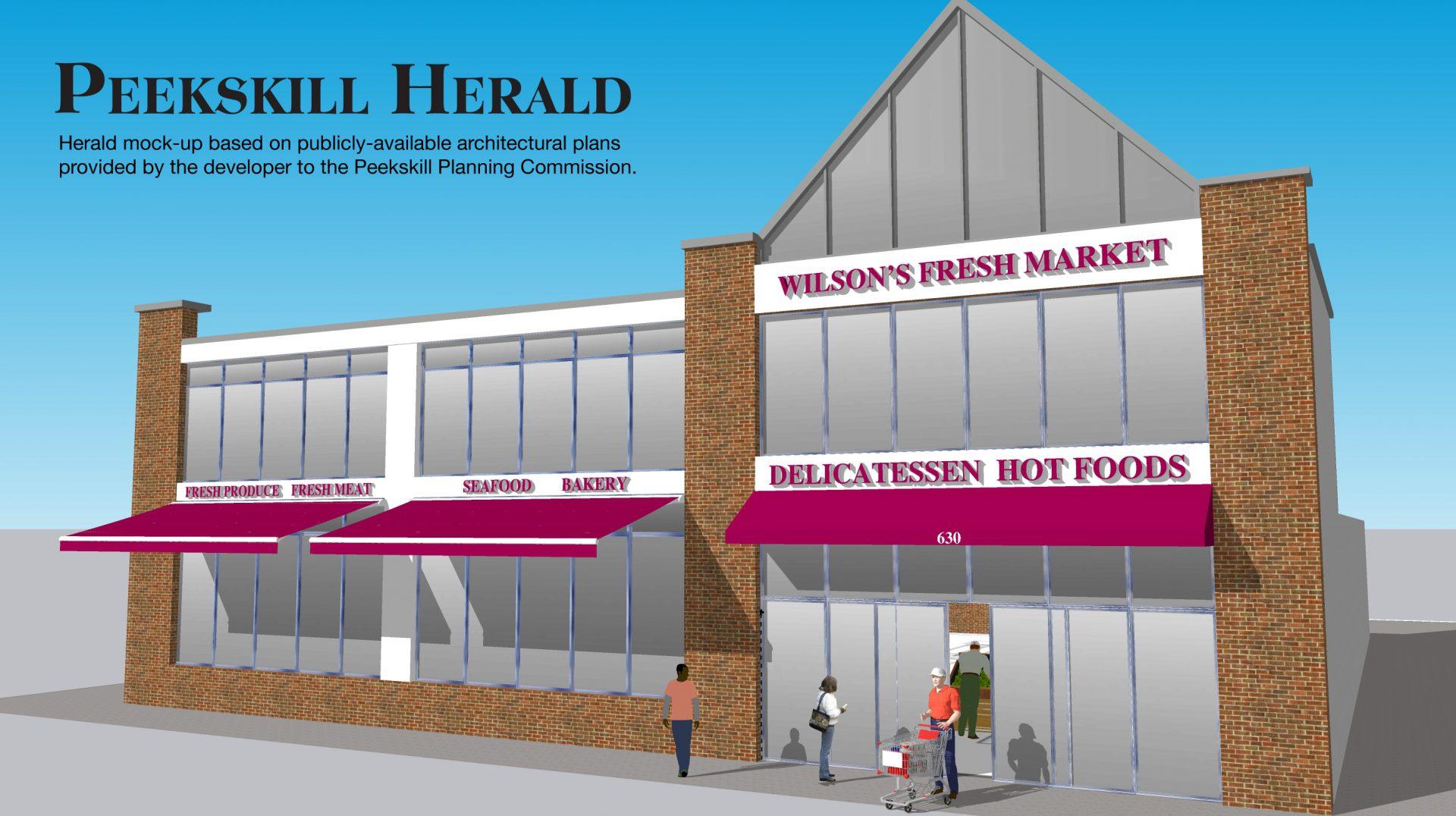 By Jim Striebich Peekskill’s south side will soon feature its own neighborhood-sized version of the C-Town / La Placita grocery store familiar to downtown shoppers.

A March 9th Planning Department filing by Wilson Narvaez, owner of the popular Park Street market, reveals plans to gut renovate the existing building at 630 Washington Street (at the corner of Roosevelt), creating a full-service grocery with a meat/seafood department and bakery. Similar to La Placita, the renovation will add a partial second floor for offices and a break room, and includes a forty-foot glass-and-steel peak reminiscent of the downtown store.

Based on architectural drawings included in the application, the new store may be called Wilson’s Fresh Market, and will replace an existing bakery and gym. Working from an elevation drawing included in the Planning Department’s staff report, the Herald created the 3D mock-up above to provide a sense of what the finished store may look like from Washington Street. That image is above. The new store has a sales floor area of 9,500 square feet – roughly half the size of La Placita.

Last Thursday March 18th, Narvaez and his architect John Lentini appeared before the Zoning Board of Appeals via Zoom, seeking a variance to allow for six fewer parking spaces than is required for the proposed use in the C-3 General Commercial zoning district. Despite plans to remove an existing garage from the property, the architect was unable to fit the required 32 off-street spaces onto the corner lot.

During the ZBA meeting, board members and City Consulting Engineer John Lynch found a potential workaround by altering some of the proposed planted area to allow for two more parking spaces, reducing the needed variance to just four or five spaces.

Peekskill Resident Lindsey Fitzgerald, owner of a home on Washington Street opposite the proposed store, called into the hearing expressing concerns on behalf of her tenant that proposed new metered parking  in front of the store would be a burden for area residents – some of whom do not have driveways, and already struggle to find street parking. “A couple of people who live in the area are low-income residents. You’re going to push the cost of parking onto them, in order for the developer to come in and use city parking.”

Fitzgerald requested a traffic study and a parking study – citing a parking study which was implemented for the mixed-use development project at 216 South Division last year. She reminded the board of the December 2019 fatal car-vs-pedestrian accident just a few blocks away at Washington and Requa. “The safety issues are real, the traffic is real, and this project – the way it’s designed – is just going to exacerbate all those problems.”

Board members also read emails from area residents David Carpenter and D.T. Henry, both expressing concerns about the project, in particular its effects on traffic and parking on Washington Street.

Other nearby homeowners are looking forward to the new grocery store. Tina Bongar, who lives three blocks away with her husband Michael, says she sees the proposed market as a neighborhood improvement. “People in the neighborhood are excited about it. La Placita is one of the best-run businesses in Peekskill. The new store is within walking distance for hundreds of families, and will provide access to healthy foods for a largely underserved community, many of whom don’t have cars.”

At the meeting’s conclusion, the Zoning Board approved the requested variance for up to five parking spaces fewer than required by city code – subject to several conditions, including revision of proposed plantings to facilitate two additional off-street parking spaces, and addition of signage encouraging customers to park in the off-street lot on the north side of the property instead of on the street.

The Board did not mandate parking or traffic studies, however they recommended to the city Planning Commission to exclude the proposed metered parking, and noted that the applicant still needs to work out a safe means for delivery trucks to enter and exit the parking lot for unloading. Additionally, the Westchester Planning board, which prohibits trucks from backing into Washington Street, will need to sign off on the plan.