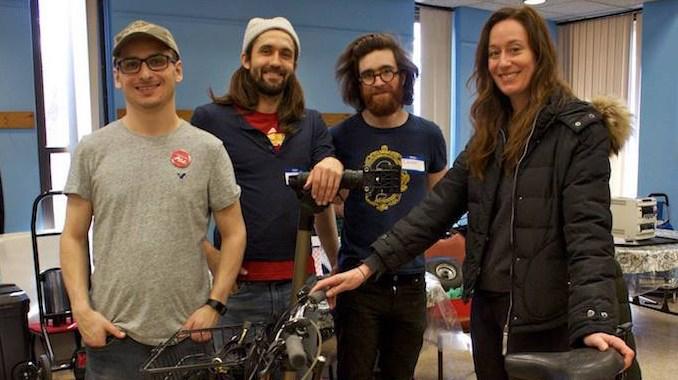 Lamp repair and sewing were the busiest stations at Peekskill’s first Repair Cafe at the neighborhood center on March 16.  A favorite ‘customer’ of Kay Barthelmes was a 7-year-old girl who was unable to wear Ugg boots handed down to her because a button that fastened one of them was missing.  Barthelmes hand stitched it and the girl was thrilled.
Some 40 people came to the Repair Cafe said Councilwoman Vanessa Agudelo who spearheaded the effort that was sponsored by the City of Peekskill with  support from the Peekskill Conservation Advisory Council, Field Library, the Peekskill Cortlandt Amateur Radio Association and Peekskill Toastmasters who provided food for the Cafe.
The Repair Café idea began in Amsterdam in 2009 and was brought to New Paltz in 2013. The mission of Repair Cafe is to transform the throw-away economy, one beloved item at a time, to reduce how much stuff goes into the waste stream, to preserve traditional repair know-how & skills,

and pass them on, to show the people who have this knowledge that they are valued, to feed curiosity about “the way things work”, provide scientific diversion and have fun along with fostering community, sustainability, and resilience.
At the Peekskill event there were 18 repair coaches working various stations including bike repair, electronics (computers and wireless speakers), electric appliances such as toasters, Keruig coffee makers, cd players, microphones .  There was a furniture workstation along with an automative diagnostic area staffed by Brian Dee of Brian’s Automotive. He was the only business represented.  There was a table with free items on it and also a table to take items apart and put them back together.  This was the way many of the coaches learned how to repair.
About half the people who came weren’t bringing items to have repaired, but were curious about what it was. “One couple who recently moved to Peekskill came to learn about the community and where they could volunteer,” said Barthelmes. “It was a very informal atmosphere with people talking to one another.”
One woman brought her bike that she had paid to have repaired at a professional shop and it still wasn’t working. She was delighted with the coaches who fixed it for her because she was thinking she was going to have to throw it out. She found out the motto of Repair Cafe applied to her situation.  Toss it? No way! is the motto.


It’s not unusual that lamp repair was so popular.  “Where do you take a lamp to be repaired,” said Barthelmes. “It’s not that difficult to repair if you know what you’re doing.”
The sense of community is what drew Peg Taylor, one of the sewing coaches. She had volunteered at other repair cafes. One person was watching her repair a sweater

and commented on how fast she was working.  She said she brought her knitting and was planning on doing that while waiting for repairs but never touched the knitting because there was a steady stream of people needing things mended. “There was a nice sense of community,” said Taylor.
The hope is that Repair Cafe will return to Peekskill in about three months, said Barthelmes who is a member of the Peekskill Conservation Advisory Council. She said the goals of the Conservation Advisory Council matches that of Repair Cafe.  For more information about Repair Cafes in the area go to www.repaircafehv.org.
Delete Image
Align Left
Align Center
Align Right
Align Left
Align Center
Delete Heading