Camera gives view of how long line is to vote early; updated every 30 seconds 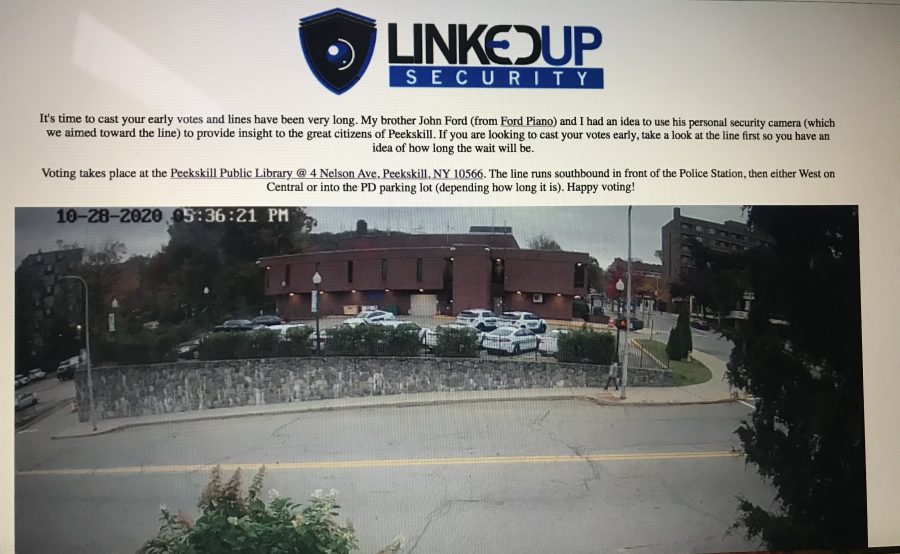 A Christmas gift last year of a home security camera to keep an eye on pets from Michael Ford to his brother John has made a huge difference for those who want to vote early in Peekskill.
On Monday, the brothers were talking about the camera system inside John’s artist loft apartment on Central Avenue. They figured out if they turned the camera toward the window, they could see how long the line was for people waiting to vote at the Neighborhood Center.  Mike Ford’s two businesses (security systems and website design) coalesced into PeekskillVoting.com. The view is refreshed every 30 seconds.
“I thought it would be something fun for the community,” said Mike Ford who owns Linked Up Security and also does website design. He was glad to find the domain name peekskillvoting.com available on Monday when he created the page.
Amy Perlow, who created PeekthePolls, a crowdsourcing platform on Facebook and Twitter to give updates on the wait time, said the wait is approximately a half hour when the line gets to the corner of Nelson and Central Avenues. When the line continues down Central and through the police department parking lot, it’s about an hour wait.

When early voting began on Saturday, the line went the other way, up Nelson Avenue and turned onto Main Street and snaked down along into the parking lot of Bohlmann Towers. But on Sunday when people started heading toward Central Avenue the Ford’s camera became pertinent. People were lined up on Saturday at 10:15 for the noon opening and at 7:15 when the polls opened at 8 am.
On Tuesday, Westchester County Board of Elections added an additional hour to the locations.  Voting times for Peekskill are:  Thursday, Oct. 29 from 12-9; Friday from 8 -5; Saturday from 12-6; Sunday from 12-6.
Perlow said she sent an email to the volunteers who signed up to keep an eye on the line and told them about the live stream video as well as the extended hours and advised them that they don’t have to wait on such a long line to give updates.
Once inside the neighborhood center, voters use hand sanitizer and gloves. All the voting records are on ipads and a greeter indicates what table will take the next voter. Once a voter has given their name and the poll worker finds the name on the ipad, the voter is asked for an electronic signature that generates a ballot from a printer. The voter is directed to a table where they can privately fill in the circles on their ballot and then cast their ballot into one of the two machines set up in the Neighborhood Center. The entire process is well organized. Upon leaving, a voter can take a sticker proclaiming they voted.