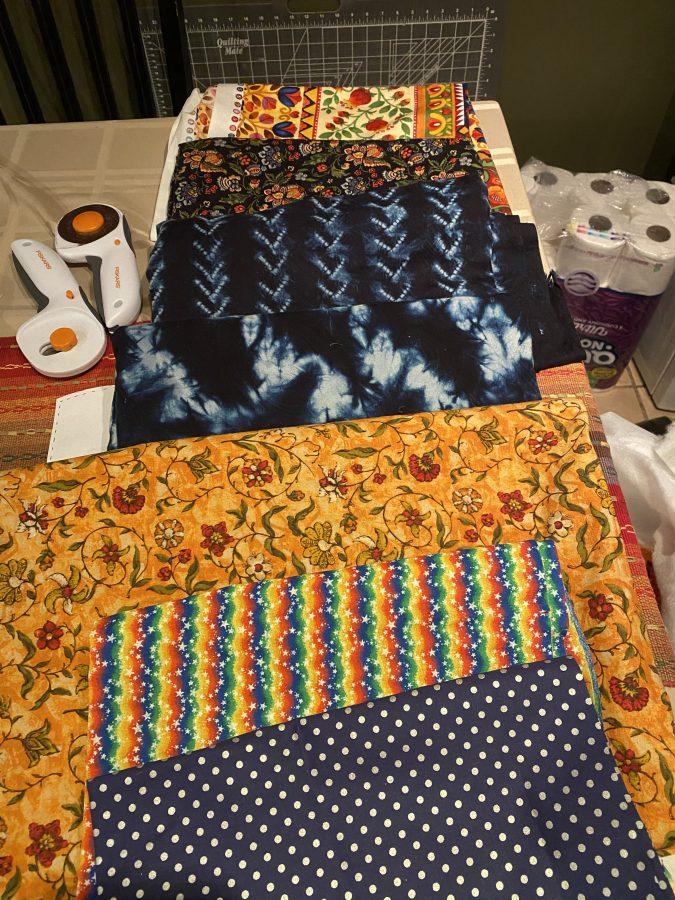 A relative’s request for a homemade mask and the awareness that people would be hungry during the pandemic prompted a “Pay It Forward” initiative at the Bean Runner Café on S. Division and Esther streets. Drew Claxton and her husband Ted Bitter, proprietor of the Bean Runner Café, have been giving away masks and food to people for the past eight weeks.
Drew Claxton’s niece, who works in administration at a hospital, needed a mask when she went to work and knowing her aunt was a quilter, asked her to make one. Claxton had a closet full of material for her quilting projects and looked online for a mask pattern and began sewing.


“I hadn’t used a sewing machine in nearly 50 years since I was in high school home economics class,” said Claxton who would sew her quilt pieces by hand when she was commuting into New York on the train. A friend lent her a sewing machine and she picked it up right away. “It’s simpler than I expected. Not much has changed in how the machine operates,” she said.  She compared it to learning how to ride a bike and the way the skill comes back to you even if you hadn’t used it for years.
Others have also volunteered to help, and they have produced a few hundred masksthat are put in individual baggies and left at the Bean Runner for people to pick up. Claxton has produced more than 500 masks since she began sewing them.
Sewers include Lise Prown, Sharon Persinger, Carmen Villanueva, Cynthia Anderson, Liz Oliveto, Ann Douglas and Jeorjia Shea. Carmen Williams also volunteered to cut material along with sisters Erica Martin and Noemi Rowland who work at the front desk of the Inn on the Hudson where General Manager Doug Dellipaoli supports their effort by letting them cut while working since business is slow.  Mary Rainey and Ted Bitter coordinate between the cutters and sewers.
Claxton found that people had sewing machines in closets that hadn’t been used in years. They were happy to take them out, dust them off and begin sewing what has become an essential piece of protective gear.

There are all sorts of patterns and ways to secure masks, from behind the ear to tied in the back of the head. Some masks have cotton batting and others have pockets in which to put a filter or tissue. The colorful masks are as individual as the people creating them.  She makes them to fit children as well as adults. People interested in masks can email Claxton at [email protected] or stop into the Cafe. Children’s masks must be ordered through email. Claxton would welcome others to help cut and sew.
Ted Bitter realized pretty quickly that when businesses shut down that people wouldn’t be able to afford meals and his employees wouldn’t be able to work as many hours, so he devised a “Pay What You Can” or “Pay it Forward” campaign that began at the end of March. Since then he’s received in excess of $2,000 and has provided more than 200 meals to people.

His largest one-time donation was $500. “We ask no questions, if you can afford to give us something, fine, if not, that’s fine also,” said Bitter who has owned and run the Bean Runner Café for 12 years. And since physical distancing is in place, people can call in an order (737-1701) and pick up at the Café.  The Café, at 201 S. Division Street, is open Tuesday through Sunday from 8 am to 2 pm.
This endeavor has allowed him to keep one of his 5 employees working full-time and four others, who are all part-time, have had their hours reduced by 50 percent. One of his employees is not working through the pandemic and taking care of a family member.